Brazil logistic fit since the daily data has not rolled over the peak to allow lognormal fit. Text in the plot now includes the estimated ultimate maximum plus/minus the 95% confidence interval (two standard deviations).

Today and going forward the update will include US and world C19 death estimates for beginning of months ahead and error estimate based on today's fit.

US June 1 C19 total death estimate is up slightly from two days ago. 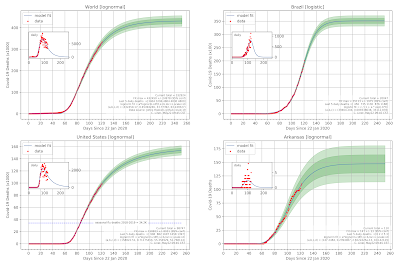 Posted by Prof. Christopher L. Liner at 8:54 AM